How to Make a Hot and Spicy Habanero Sauce Recipe

Habaneros are among the hottest peppers on earth. This habaneros sauce will produce blistering heat. So Be Careful. Employ it on virtually anything you would use hot sauce on.

It is particularly good on steak and grilled meats. The heat can be adjusted by augmenting the number of habaneros or downshifting to a less intense pepper such as a jalapeno. Or, for no heat, omit the hot peppers. You’ll be left with a spicy, but not hot, red pepper sauce.

This peppers are hot. How hot? If you’ve ever had a ripe jalapeno in a salsa or Mexican dish, you know how hot they are. Habaneros are 100 times hotter.

This is why I say be careful when making this sauce. In fact, I would suggest you start with 1/2 of the habanero in this recipe, taste and add more if you want it hotter.

Habanero peppers are about 1 inch to 2 1/2 inches long and start out green, then yellow (orange) and then red. I’ve only seen yellow and red versions but I’ve read the red “savina” habanero is the hottest measuring 500,000 Scoville heat units (SHU). I’ve also read they can be white, green, purple or brown.

My Personal Experience With These Hot Peppers 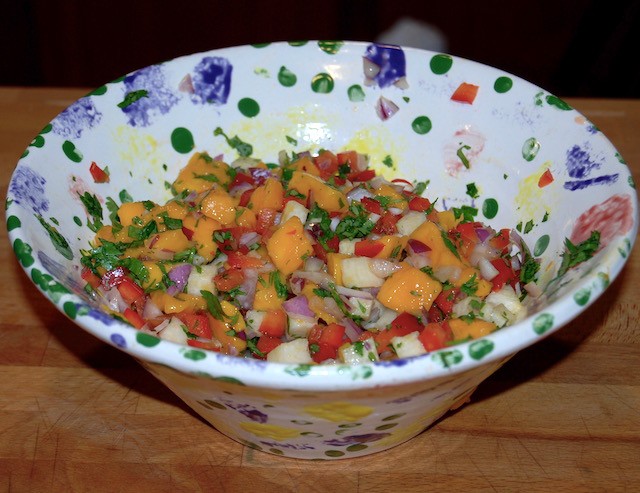 We were having a party a couple of years ago and I made a mango salsa that I wanted to spice up so I cut up a fresh habanero into 8 pieces. I know it was 6 pieces because I was told by a friend to make sure I remove all 6 pieces before serving because you don’t want anyone to get a whole piece in a bite.

So I let the habanero pieces sit in the salsa for about an hour, removed them and tasted the salsa and it was hot. Not to hot but got me sweating after a few bites.

I wanted to see just how hot these peppers are so I took a 1/6 piece and cut it in half and put it in my mouth. That was a mistake. Now maybe I’m a wimp when it comes to hot peppers, but this felt like someone lit a fire in my mouth. WOW!

So please be careful with this sauce especially if you are serving it to kids who I can tell you right now are not going to like it because of the heat.